My last book on Paris, Dawn of the Belle Epoque: The Paris of Monet, Zola, Bernhardt, Eiffel, Debussy, Clemenceau, and Their Friends, took the reader from the multiple disasters of 1870–1871 through the extraordinary reemergence of Paris as cultural center of the Western world, ending with the triumphal Paris Exposition of 1900.
​

It was not, of course, as if Paris and Parisians experienced no trials or tribulations during these years. The poor continued to suffer, and their advocates, such as Georges Clemenceau and Louise Michel, continued to have their work cut out for them. Moreover, a prolonged period of economic listlessness provided an ongoing undercurrent of anxiety, exacerbated by debacles such as the Union Générale bank crash and the Panama Canal scandal—thoroughly avoidable disasters that wiped out the life savings of so many who could not afford to lose a sou. In addition, the unsettled nature of the Third Republic itself undermined confidence. Monarchists and the Church continued to battle republicans of all stripes, while anti-Semites and nationalists, feeding upon the swirling undercurrent of fear, almost tore the nation apart in their victimization of an innocent Jewish soldier, Captain Alfred Dreyfus.

​And yet, somehow, a remarkable series of artists and innovators emerged during these years, battling traditionalists and—at least for a substantial number—achieving success. Claude Monet, Emile Zola, Sarah Bernhardt, and Gustave Eiffel were well-to-do or even wealthy by the turn of the century, as was that innovative founder of the Samaritaine department store, Ernest Cognacq. Auguste Rodin and Pierre-Auguste Renoir had also attained financial success, and others among their acquaintances had likewise left their years of poverty far behind. There would always be those such as Paul Gauguin who would die impoverished, and the market for paintings by Camille Pissarro, Alfred Sisley, and Paul Cézanne did not really take off until after their deaths. But a surprising number of the starving artists and entrepreneurs of the 1860s and 1870s had, by the turn of the century, found fame and fortune in Paris.

​A new cast of characters greets the reader in this book, starting with nineteen-year-old Pablo Picasso, who arrived late in the year 1900 to visit the Paris exposition and glory in the fact that one of his youthful paintings was hanging in the Spanish pavilion. The new century would soon belong to Picasso, as well as to Henri Matisse, Igor Stravinsky, Claude Debussy, Maurice Ravel, Marie Curie, Gertrude Stein, Marcel Proust, Jean Cocteau, and Isadora Duncan. It would belong just as rightly to Louis Renault, André Citroën, Paul Poiret, François Coty, and all those innovators and entrepreneurs who created new technologies and far-flung businesses based in Paris, as well as to those magnificent men—and women—who added excitement and adventure to the Paris scene by piloting some of the era’s earliest automobiles and flying machines.

This did not mean that the leading lights of the previous century had somehow stepped aside. Sadly, Edouard Manet and Berthe Morisot had departed, and Zola was about to make his dramatic exit, but Monet and Renoir continued to paint for wealthy collectors, and Sarah Bernhardt soldiered on, reaping accolades and gamely entertaining the troops during World War I despite her recently acquired wooden leg. Gustave Eiffel, disgraced in the aftermath of the Panama Canal scandal, would keep his  word and never build another bridge or tower, but his experiments in radio communications and aerodynamics would keep him fruitfully active for the rest of his long life. Claude Debussy, after two decades of battling traditionalists, was about to emerge as a giant on the music scene, while Georges Clemenceau would eventually cap a roller-coaster career in politics by stepping in at the age of seventy-six to lead his country to victory in war.

These years, from 1900 for more than a decade, were remarkable ones—remembered in the Great War’s aftermath as the Belle Epoque. They were years of extraordinary achievement in almost every field of endeavor, marked by a dizzying sequence of breakthroughs. Yet they were also years of shadows, and those shadows were growing longer as war approached—a cataclysm that tested the mettle of the City of Light, even as it brought the end of an era. 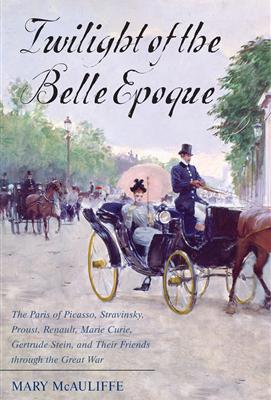 through the Great War