When Paris Sizzled​ vividly portrays the City of Light during the fabulous 1920s, les Années folles, when Parisians emerged from the horrors of war to find that a new world greeted them—one that reverberated with the hard metallic clang of the assembly line, the roar of automobiles, and the beat of jazz.  Mary McAuliffe traces a decade that saw seismic change on almost every front, from art and architecture to music, literature, fashion, entertainment, transportation, and most notably, behavior.

The epicenter of all this creativity, as well as of the era's good times, was Montparnasse, where impoverished artists and writers found colleagues and cafés, and tourists discovered the Paris of their dreams.  Major figures on the Paris scene—such as Gertrude Stein, Jean Cocteau, Picasso, Stravinsky, Diaghilev, and Proust—continued to hold sway, while others now came to prominence—including Ernest Hemingway, Coco Chanel, Cole Porter, and Josephine Baker, as well as André Citroën, Le Corbusier, Man Ray, Sylvia Beach, James Joyce, and the irrepressible Kiki of Mortparnasse. 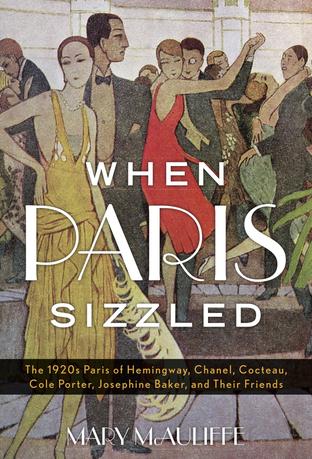 "A vivid chronicle of ten roiling years in Paris.  Historian McAuliffe takes up where her last book left off, in 1918, to focus on the city's cultural life after World War I. What Americans called the Roaring '20s, the French termed les Années folles, "the Crazy Years," which the author deems an apt epithet for the 'what the hell' attitude that pervaded the city's upper class. But there was more to life in Paris than 'endless parties and late-night jazz clubs.'... McAuliffe portrays a city bursting with creativity in art, music, dance, fashion, architecture, and literature....Fast-paced and richly detailed....McAuliffe creates an expansive landscape in her examination of a transformative decade"                                                       — KIRKUS REVIEWS

"McAuliffe follows Dawn of the Belle Epoque with another breezy, brisk, well-researched work about Paris, this time focusing on the dazzling figures populating the once-denigrated Paris neighborhood of Montparnasse at its mesmerizing peak.... McAuliffe smartly keeps her eye on political events in Paris as well as in central Europe, especially the increasing popularity of far-right movements and Charles de Gaulle's rise in the French military.  McAuliffe recreates a lush, gorgeous world filled with talented, yet immensely flawed innovators who experienced les années follies ('the crazy years') as a rare escape into creativity, glamor, and respite from the sobering reality of a world prone to devastating wars."                                                                — PUBLISHERS WEEKLY