“InTwilight of the Belle Epoque this brilliant social historian applies her novelistic approach...to the early 20th century, interweaving a multitude of stories to create — through skillfully chosen glimpses into the lives of its most talented inhabitants — an unforgettable portrait of Paris....  She blends each ingredient of an incredible époque into a vivid and hugely enjoyable narrative of extraordinary times.

"This is a work of serious history, but has some of the easy charms of the coffee-table book... The divisions of French society are always just below the surface....  All of Ms. McAuliffe's Belle Epoque moments, bright and foreboding, build to the horrors and glories of the war of 1914-18."

In Twilight of the Belle Epoque, Mary McAuliffe protrays Paris in full flower at the turn of the twentieth century, where creative dynamos such as Picasso, Matisse, Stravinsky, Debussy, Ravel, Proust, Marie Curie, Gertrude Stein, Jean Cocteau, and Isadora Duncan set their respective circles on fire with their revolutionary visions and discoveries.

But all was not well in this world, remembered in hindsight as a golden age.  Wrenching struggles between Church and State as well as between haves and have-nots shadowed these years, as Paris marched relentlessly into and through the Great War—a cataclysm that would brutally bring the Belle Epoque to its close.  Through rich illustrations and evocative narrative, McAuliffe brings this remarkable era from 1900 through World War I to vibrant life. 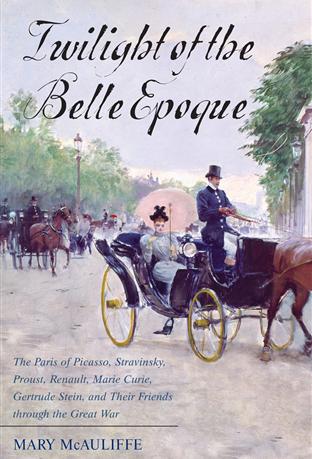 The Paris of Picasso, Stravinsky, Proust, Renault, Marie Curie, Gertrude Stein, and Their Friends through the Great War