“We’re familiar with the names— William the Conqueror, Richard Lionheart, Eleanor of Aquitaine—but probably less so with the gripping stories of their never-ending confrontations with rivals at home and enemies abroad. It’s this tangled history that McAuliffe’s aptly titled Clash of Crowns sets out to unravel. That she succeeds, splendidly, has to do with her uncanny ability to embed the myriad names and dates in a clearly developed narrative that features characters as fully fleshed out as those in any play. . . . McAuliffe’s prose is a wonderful instrument, her tone of voice down-to-earth and commonsensical, all in all, a pleasure to read.”                                               — Providence Sunday Journal 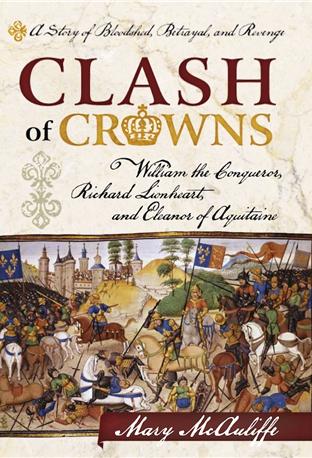 William the Conqueror, Richard Lionheart and Eleanor of Aquitaine

A Story of Bloodshed, Betrayal, and Revenge