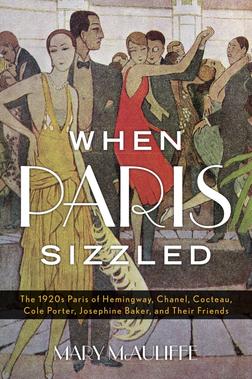 "McAuliffe draws fascinating connections among the politicians, the innovators and the artists... [She] brings the city to life in a kind of you-are-here-with-Cocteau-and-Chanel tableau vivant.  And everyone is here at McAuliffe's proverbial Montparnasse party.  Few can top When Paris Sizzled, a book...packed with intriguing character sketches and associations."

"A vivid chronicle of ten roiling years in Paris.  Historian McAuliffe takes up where her last book left off, in 1918, to focus on the city's cultural life after World War I. What Americans called the Roaring '20s, the French termed les Années folles, "the Crazy Years," which the author deems an apt epithet for the 'what the hell' attitude that pervaded the city's upper class. But there was more to life in Paris than 'endless parties and late-night jazz clubs.'... McAuliffe portrays a city bursting with creativity in art, music, dance, fashion, architecture, and literature.  Drawing on memoirs, biographies, and the many histories of the period, she follows an abundant and diverse cast of characters, creating brief vignettes about the yearly evolution of their lives and careers.  Besides the usual suspects found in any history of the Lost Generation—Hemingway, Fitzgerald, Stein, Picasso, Pound, Man Ray, Kiki of Montparnasse, and Cocteau, to name a few—the author includes politicians (de Gaulle, Clemenceau, Pétain) and innovators in fields other than the arts, such as cosmetics manufacturers Helena Rubinstein and François Coty; architect Charles Jeannette, who became famous as Le Corbusier; Marie Curie; couturiers Paul Poiret and, of course, Coco Chanel; and automotive giants Renault, Peugeot, and Citroën....Fast-paced and richly detailed....McAuliffe creates an expansive landscape in her examination of a transformative decade."
— KIRKUS REVIEWS​

"McAuliffe follows Dawn of the Belle Epoque with another breezy, brisk, well-researched work about Paris, this time focusing on the dazzling figures populating the once-denigrated Paris neighborhood of Montparnasse at its mesmerizing peak. “The Lost Generation” of expat writers and artists helped transform Montparnasse into a culturally rich, tumultuous community where the luminous and daring Josephine Baker danced, Gertrude Stein kvetched about James Joyce, and the taxi horns provided inspiration for George Gershwin. Not surprisingly, the area’s notoriety only grew with the proliferation of the expats and artists’ casual and often rash affairs, drug use (especially Jean Cocteau’s opium addiction), and other self-indulgent behaviors aided by reckless spending. Weaving in key advancements in cultural production (music, architecture, theater, film) and technological evolution in the automobile industry, McAuliffe smartly keeps her eye on political events in Paris as well as in central Europe, especially the increasing popularity of far-right movements and Charles de Gaulle’s rise in the French military. McAuliffe recreates a lush, gorgeous world filled with talented, yet immensely flawed innovators who experienced les années folles (“the crazy years”) as a rare escape into creativity, glamor, and respite from the sobering reality of a world prone to devastating wars."

​McAuliffe repeats the tried and true formula she used in Dawn of the Belle Époque (CH, Jan'12, 49-2911) and Twilight of the Belle Époque (CH, Sep'14, 52-0489) to chronicle her beloved Paris in the "Roaring '20s," or "les années folles"-the "crazy years." She skillfully details the lives, loves, and artistic triumphs and disasters of the spectacular collection of artists, scientists, engineers, and politicians whose lives seemed to center on and blossom in the French capital. All the "usual suspects" are here-from Josephine Baker to Hemingway to Cocteau and Chanel. This splendid volume provides a year-by-year account of a city bursting with artistic and practical endeavor. Basing her book on a thorough mining of the era's printed primary sources and research in the period's best histories, the author depicts a city whose magnetism created the artistic community centered around Montparnasse, which became the cultural capital of Western civilization; the brilliance of the "City of Light" glowing all the more starkly against a gradually darkening domestic and international scene. Bottom line: the volume will appeal to a wide variety of readers-from lovers of Paris to graduate students in the arts, literature, and history. An indispensable acquisition.  Summing Up: Essential. All levels/libraries.
- G. P. Cox, Gordon State College, CHOICE REVIEWS, American Library Association