Praise for Paris on the Brink

"Paris on the Brink vividly evokes the  cultural and political life of Paris during the 1930s.  The cast of characters...mingle in a bright narrative that wheels from portrait to portrait like a whirligig overshadowed by the lengthening specter of war.  McAuliffe has written a truly absorbing book."

"In her enlightening cultural history, McAuliffe details the swirling world of art, fashion, literature, and politics of 1930s Paris.  Despite the instability of the decade, which ended with German occupation, Paris remained the center of European cultural creativity, and McAuliffe follows the lives of the city's influential people as they negotiated the decade's shifting political and economic sands.  With a breathless pace, McAuliffe's richly detailed history wonderfully captures Paris in the 1930s."

​       "Rich and fascinating, this cleverly woven tapestry of stories from the turbulent 1930s shows how the political and artistic worlds of Paris came together in the powerful march of history.  Paris on the Brink delivers a genuinely engaging and dramatic account of a profoundly significant era."
- Victoria Best, author An Introduction to Twentieth-Century French Literature

​        "A breezy, rollicking and vastly entertaining popular history of the international cultural and intellectual life of Paris during the troubled decade just before the Second World War."​
- Laird Easton, author The Red Count: The Life and Times of Harry Kessler ​ 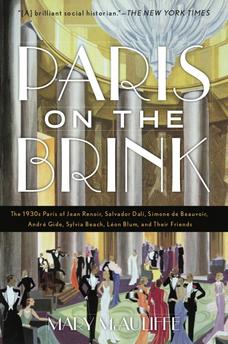