​            Emerging from the madcap romp of the Twenties (or les Années folles, as these years were known in Paris), denizens of the 1930s aspired to elegance and glamour.  But as Depression spread from America and Britain to the Continent, fewer and fewer could aspire to much beyond getting bread on the table, even though—prompted by cinematic fantasylands—they could and did continue to dream.
Dream, and agitate.  For this was a decade of strife, between the shrinking number of haves and the ever-growing masses of have-nots.  This decade, beginning with the Wall Street Crash of 1929 and ending with war and German Occupation, was a dangerous and turbulent one in Paris, in which workers began to flex their economic muscle, and those who opposed them struck back with increasing violence.  The Popular Front itself, greeted by the masses as the answer to their prayers, was viewed by their bosses as well as by the well-to-do and conservatives of all stripes as a moral as well as political and economic disaster.  The fact that the Popular Front’s leader, Léon Blum, was Jewish, added a dangerous anti-Semitic element to the mix.
Readers of my previous books on Paris—Dawn of the Belle Epoque, Twilight of the Belle Epoque, and When Paris Sizzled—will recognize many of the major figures here, including Ernest Hemingway, Gertrude Stein, Picasso, Stravinsky, Coco Chanel, and Marie Curie, in addition to Jean Renoir, Sylvia Beach, James Joyce, André Gide, Jean Cocteau, Man Ray, Le Corbusier, and Josephine Baker.  But others now make their appearance, most notably Salvador Dalí, Elsa Schiaparelli, Simone de Beauvoir, Jean-Paul Sartre, Henry Miller, and France’s first Socialist prime minister, Léon Blum.
Without question, life in Paris became increasingly difficult during the 1930s, as the economy and the job market shrank.  No longer were foreign workers welcomed to France, as during the 1920s, when they had replaced the millions of French workers lost or wounded during World War I. Jewish refugees from Hitler’s Germany, often left-wing in their politics, also encountered increasing hostility.  The addition of large numbers of impoverished Spanish refugees, fleeing into France during Spain’s deadly civil war, only added to the instability of the times, in which workers and middle class alike were hit by rising taxes and a falling franc. And women workers, welcomed to the work place during and immediately after World War I, were now being shooed back into their homes, to bear children for a nation that had suffered a huge loss of population, and whose numbers were not rising fast enough to compete with Germany.
Overall, there was the threat of Hitler’s Germany and Stalin’s Soviet Union, as well as Mussolini’s Italy—although a number of French conservatives were quite taken with Mussolini, and as the decade progressed, more and more French were looking with longing at Germany, where Hitler dazzled with his Nuremberg rallies, and seemed to offer the kind of authority figure, replete with tradition and order, that they yearned for.  As the divide between haves and have-nots increased, so did the political split between left and right, with animosities growing to super-saturation and exploding in brutal clashes, intensified by the blistering paramilitary leagues of the extreme right.
Yet throughout the decade, Paris remained at the center of cultural creativity, with photography and cinema the new vehicles for artistic expression, alongside an explosion of untraditional expression among a new flock of artists, especially Salvador Dalí and the Surrealists. Coco Chanel may have held tight to her streamlined elegance, but Surrealism had a ripple effect on Parisian fashion, especially the designs of Elsa Schiaparelli, who—along with Dalí—delighted, and profited, in shocking.
Throughout, France regarded its Maginot Line as a sufficient defense against a renewed and rearmed Germany.  Much to the dismay of an arrogant but clear-sighted officer by the name of Charles de Gaulle, most French, including the nation’s general staff, were content to remain passively behind this enormous fortification, without considering the developments that warfare under Hitler were taking.  France may have limped out of World War I, but it had in fact been victorious, and its citizens now took comfort in that victory. How could Germany, which they had defeated in 1918, return to haunt them now?
It was a question that Germany would decisively answer in 1940. 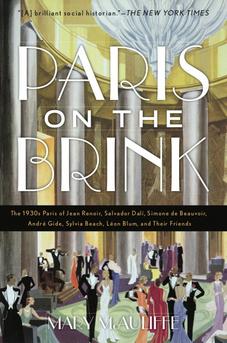