Praise for Paris, City of Dreams

"Her reputation as a social and literary historian of Paris already cemented, McAuliffe (Paris on the Brink, 2018, When Paris Sizzled, 2016) returns with a detailed history of the City of Light and its nineteenth-century transformation into the sophisticated, envied capital.  Its wide boulevards, monumental architecture, health-improving sewers and aqueducts, and efficient transportation systems began in earnest in the 1850's under Napoleon III and his chief urban planner, Georges-Eugene Haussmann.  Before becoming Emperor, Louis Napoleon in his London exile already had formulated plans for extending broad avenues west of the Louvre.  With Haussmann's skills at planning and at creating political will to action, the new Emperor created substantial parks on the city's outskirts and built conveniently situated train stations for the novel technology of rail travel.  Razing tenements and codifying design for new apartment buildings, Haussmann constructed the cityscapes of Paris so beloved in the twentieth century.  Urban elegance came at the cost of democratic rule as the former republic hardened into autocracy.  Armchair historians in particular will appreciate McAuliffe's readable yet detailed history supplemented with illustrations and bibliography.

"If you want to know how Paris came to look as it does, read this book!  Mary McAuliffe has written a thoroughly entertaining account of the politics and business behind Haussmann's famous boulevards. Weaving the lives of artists and writers into the tale of the city's transformation, Paris, City of Dreams is also a well-informed history of France's Second Empire and its inglorious end."

- David Bellow, author of ​The Novel of the Century: the Extraordinary Adventure of Les Miserables

"As the world's most magical city, Paris was created over the centuries by kings, emperors, and presidents, but, as Mary McAuliffe so magisterially reveals in Paris, City of Dreams, no one played a greater role in the modern configuration of this wondrous city than Louis-Napoleon and his chief urban advisor, Baron Georges Haussmann.  Reading this masterful account, one realizes how Napoleon III and Haussmann transformed a city of narrow lanes, insalubrious dwellings, and staggering pestilence into a triumph of vital sanitation and unparalleled beauty, creating the broad boulevards and architectural masterpieces so universally admired." 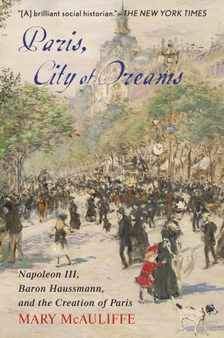 Napoléon III, Baron Haussmann, and the Creation of Paris
By Mary McAuliffe